What is IPO – International Standard?

IPO= Schutzhund. Due to political reasons, Germany no longer calls protection sport “Schutzhund” and since it originated in Germany, the rest of the world followed suit.
What does IPO stand for? Internationale Prüfungs-Ordnung.
Translation means: International auditing rules or International Exam Rules.
Now… The Sport
Schutzhund is a German word meaning “protection dog”.

Schutzhund originated in Germany in the 1800’s. In this time German Policeman were called “Schutzmann” and his K9 “Schutzhund”.

It refers to a sport that focuses on developing and evaluating those traits in dogs that make them more useful and happier companions to their owners.

IPO work concentrates on three parts- tracking, obedience, and protection. Many who are familiar with the obedience work of the American Kennel Club’s affiliates will recognize the first two parts, tracking and obedience. The IPO standards for the third part, protection work, are similar to those for dogs in police work.

While dogs of other breeds are also admitted to IPO trials, this breed evaluation test was developed specifically for the German Shepherd Dog. IPO is intended to demonstrate the dog’s intelligence and utility. As a working trial, IPO measures the dog’s mental stability, endurance, structural efficiencies, ability to scent, willingness to work, courage and trainability.

This working dog sport offers an opportunity for dog owners to train their dog and compete with each other for recognition of both the handler’s ability to train and the dog’s ability to perform as required. It is a sport enjoyed by persons of varied professions, who join together in a camaraderie born of their common interest in working with their dogs. Persons of all ages and conditions of life — even those with significant disabilities — enjoy Schutzhund as a sport. Often, it is a family sport. 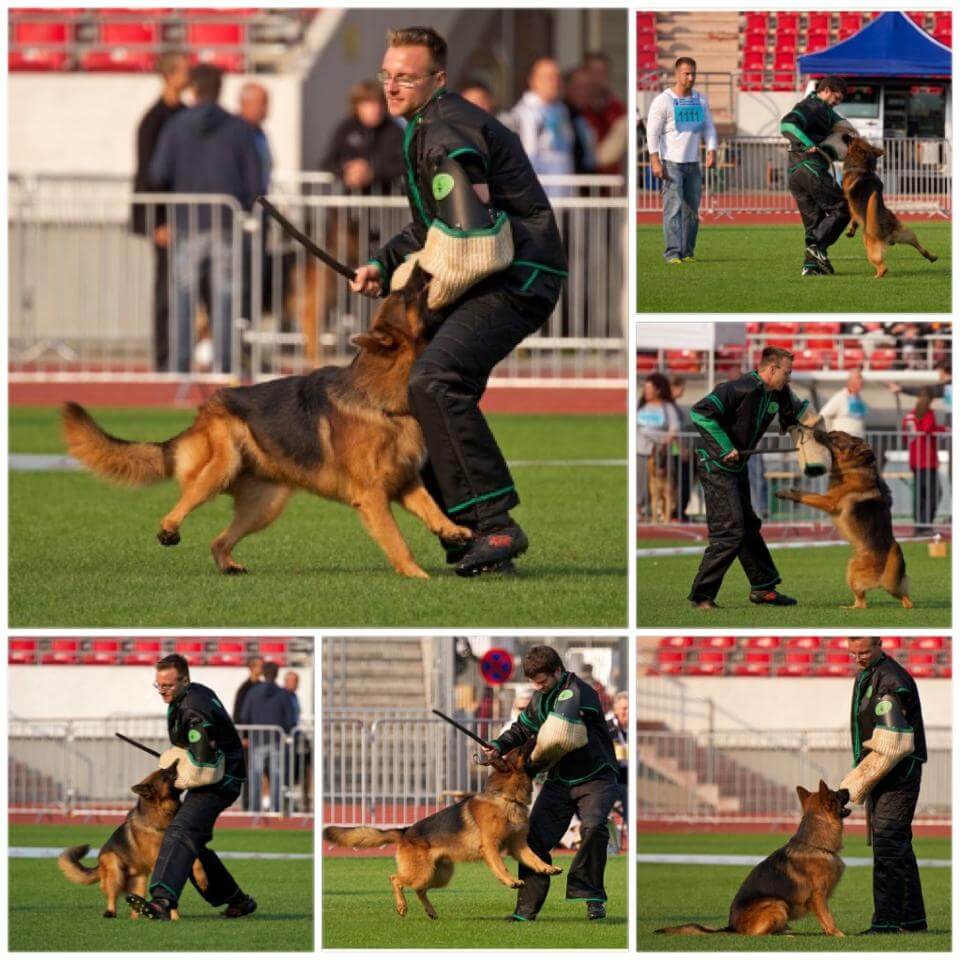 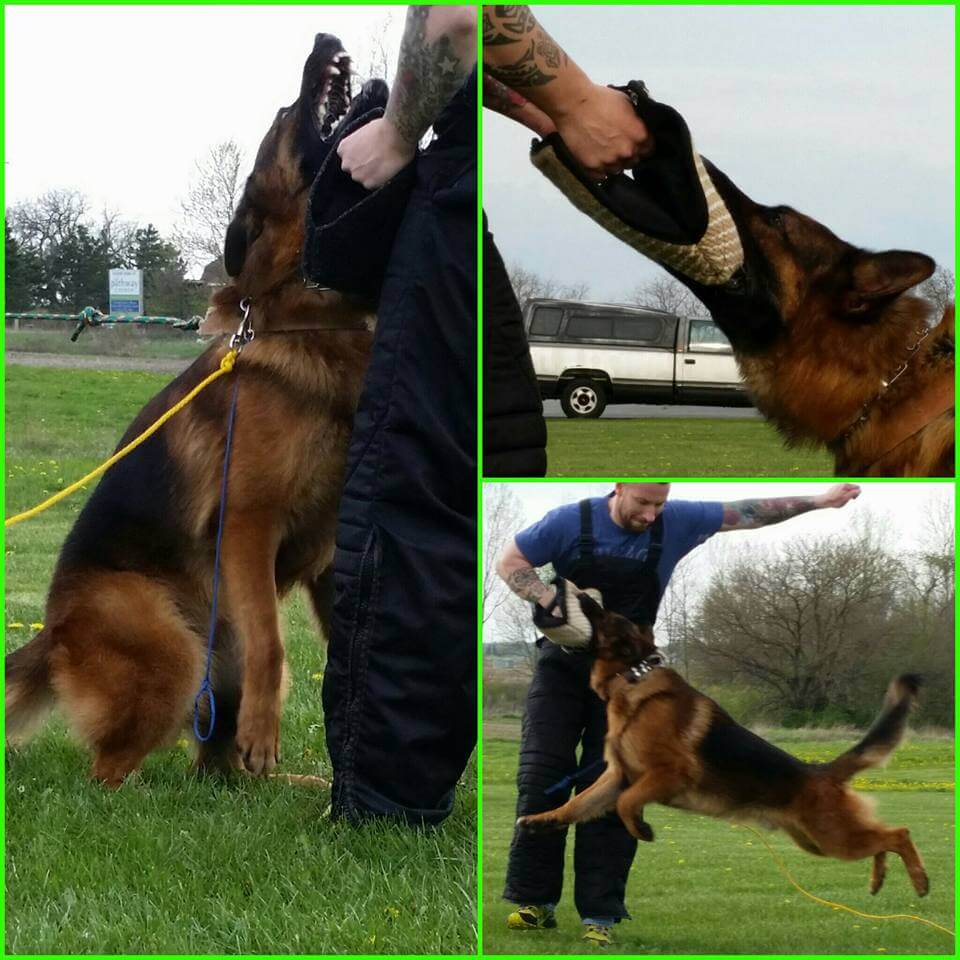 BH–The BH is a degree for traffic-safe companion dogs that tests the dogs temperament in and around people. It includes basic formal obedience – heeling on and off leash, sits, downs and recalls – as well as practical tests of the dog’s character in everyday situations. These include reaction to normal situations involving crowds of people, strange noises, joggers, cars and other dogs. Before being allowed to enter for a IPO I title, the dog must first have successsfully completed the BH.

In addition to the IPO Titles, the GSDCA-WDA offers additional training degrees. The FH1 and FH2, are advanced tracking degrees that require the dog to follow tracks over changing terrain, discriminate between cross-tracks and is at least 3 hours old. The dog must first have the BH.

There are three levels of the IPO test for which titles can be earned.

IPO I the dog must be at least 18 months old and pass an initial temperament test by the judge. The dog must heel off the leash , demonstrate the walking sit, the walking down, and the stay tests, as well as, the send-out. It must retrieve on the flat and over a hurdle. In tracking, it must be able to follow a track laid by its handler at least 20 minutes earlier. There are also protection tests.

IPO II the dog must be at least 19 months old and must already have earned its IPO I degree. It must again pass all of the obedience and protection tests required for the IPO I degree, but those tests, for IPO II, are made more difficult and require greater endurance, agility, and above all, control. There is an additional retrieve required over the six foot slanted wall. In tracking, the IPO II candidate must be able to follow a track laid by a stranger at least 30 minutes earlier.

IPO III the master’s degree, the dog must be at least 20 months old and must have earned both the IPO I and the IPO II titles. Again, the tests now are made far more difficult. All exercises in obedience and protection are demonstrated off leash. There is the additional of a walking and running stand. In tracking, the dog must follow a track that was laid by a stranger at least 60 minutes earlier.

The track has four turns, compared with two turns for IPO I and II, and there are three objects, rather than two, that must be found by the dog. The picture of obedience, strength, eagerness and confidence presented by an excellent IPO III team is a beautifully illustration of the partnership of human and dog.

The Three Parts of a IPO (Schutzhund) Trial

The Tracking Phase includes a temperament test by the overseeing judge to assure the dog’s mental soundness. When approached closely on a loose leash, the dog should not act shyly or aggressively. The track is laid earlier by a person walking normally on a natural surface such as dirt or grass. The track includes a number of turns and a number of small, man-made objects left by this person on the track itself.

At the end of a 33 foot leash, the handler follows the dog, which is expected to scent the track and indicate the location of the objects, usually by lying down with it between its front paws. The tracking phase is intended to test the dog’s trainability and ability to scent, as well as, its mental and physical endurance.

The Obedience Phase includes a series of heeling exercises, some of which are closely in and around a group of people. During the heeling, there is a gun shot test to assure that the dog does not openly react to such sharp noises. There is also a series of field exercises in which the dog is commanded to sit, lie down and stand while the handler continues to move.

From these various positions, the dog is recalled to the handler. With dumbbells of various weights, the dog is required to retrieve on a flat surface, over a one-meter hurdle and over a six-foot slanted wall. The dog is also asked to run in a straight direction from its handler on command and lie down on a second command. Finally, each dog is expected to stay in a lying down position away from its handler, despite distractions, at the other end of the obedience field, while another dog completes the above exercises.

All of the obedience exercises are tests of the dog’s temperament, structural efficiencies and very importantly, its willingness to serve man or woman.

The Protection Phase tests the dog’s courage, physical strength and agility. The handler’s control for the dog is absolutely essential. The exercises include a search of hiding places, finding a hidden person (acting as a human decoy), and guarding that decoy while the handler approaches.

The final test of courage occurs when the decoy is asked to come out of a hiding place by the judge from the opposite end of the trial field. The dog is sent after the decoy when he refuses to listen to the handler’s command to stop. The decoy then runs directly at the dog threatening the dog with a stick.

All grips during the protection phase are expected to be firmly placed on the padded sleeve and stopped on command and or when the decoy discontinues the fight. The protection tests are intended to assure that the dog is neither a coward nor a criminal menace. 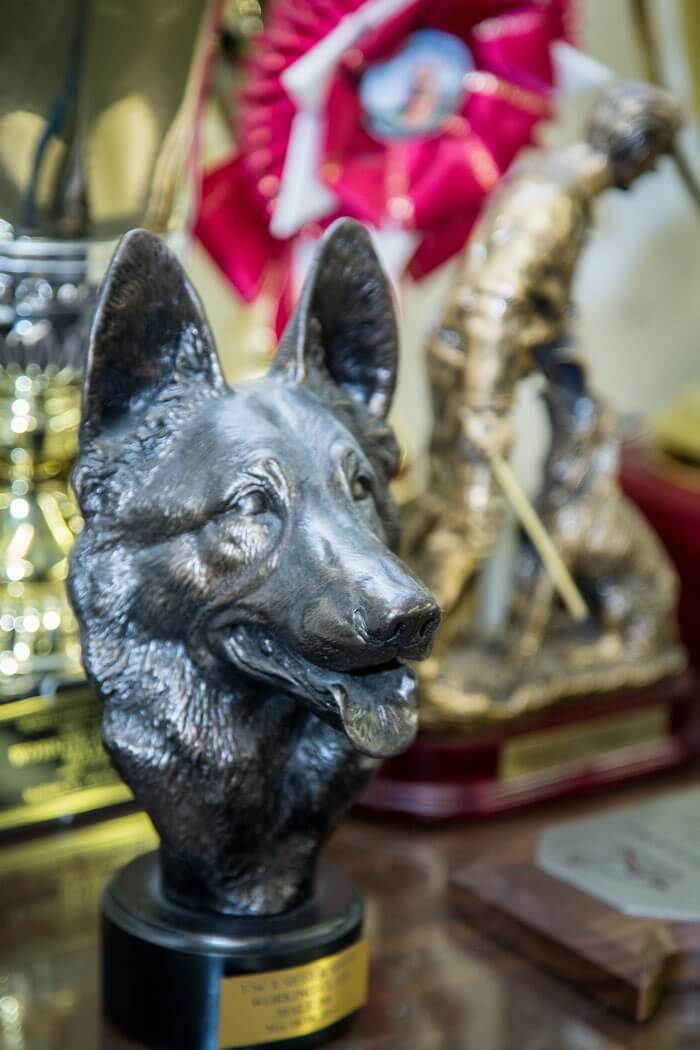